This online institute is designed to give a brief analysis and discussion of all scientific disciplines through the lens of a biblical world view. +++ SDG +++


Smoky Mountain Bible Institute
Lesson #41
Welcome back class.  Please get settled in and take a hold of your pick point rock hammer and hand lens so that we can continue our study in geology.  Let’s wrap up our discussion on geology by looking briefly at mountain valleys which I touched on in lesson 35, erosion, silt, dust and salt cores from the .

Normal erosion leads to V-shaped valleys.  It makes sense that over time as mountains wear down by rain, wind, and temperature variations, the different types of rock that make up the mountains would be broken down to varying sizes from boulders down to sand, silt, and dust. It also follows that these byproducts of erosion would cause many valleys to have soft gradual slopes giving us so many V-shaped valleys especially in the places where the mountains are older and more eroded.   This of course is in contrast to the U-shaped valleys caused by glaciers mentioned in Lesson #35.  We were able to identify evidence of glacial activity in the U-shaped valleys, with the signs of glacial till and moraines caused by the flowing ice. We can also look at the sediment, silt and dust (in areas around mountains) caused by water and wind to see how clearly the layers of these elements and known rates of erosion give evidence of a young earth on a world-wide scale.

I feel the best evidence of this type can be found in the example of salt cores drilled out of the shore line at En Gedi on the west coast of the .  Dr. Steve Austin, a geologist and creation scientist from the Institute of Creation Research in San Diego CA, evaluated the findings of the geologists A. Agnon, C. Migowski, and S Marco, who investigated the chronology of earthquake disturbances in the Dead Sea area. took Migowski's data on the uppermost 19 feet of laminated sediment of the and plotted it to make a 4,000-year sediment chronology.

Dr. Austin notes that: "The biblical account does not specifically mention an earthquake, but the earth would have been shaken by the wall's collapse. Archaeological excavations at confirm that the massive wall made of mud bricks did collapse at the time of the conquest, about 1400 B.C. The site of the ancient city of sits directly on top of a very large fault associated with the Jordan Rift valley. Surprisingly, the sediment core has a distinctive mixed sediment layer at a depth of 15.1 feet that is evidence of a big earthquake at about 1400 B.C." This salt core gives an amazing record of biblical earth quakes which would have caused the brown layers visible at the point in which they appear affirming a connection between biblical earth quakes and the salt core evidence.  If you would like to read further on this topic, I would recommend visiting the blog: umarko.blogspot.com/2010/10/walls-of-jericho-really-did-fall-in. And the ICR article by Dr. icr.org/article/greatest-earthquakes-bible/. That is where I got the chart below. 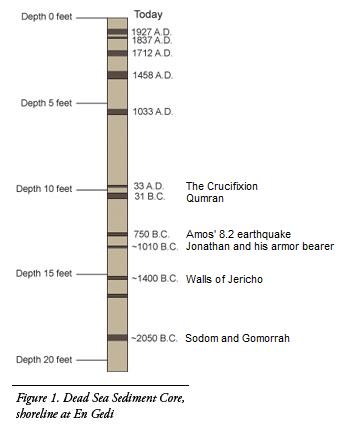 Well this concludes our study of Geology. I hope you have enjoyed our study.  Next month we will begin construction on our next wing: History & Geography.  Wings still to be built in the future are Philosophy which will contain departments on sociology, social science, and psychology and our final wing which will be Theology....important wing for a Bible institute.  So you can put away your pick point rock hammer and hand lens and get ready next month to breakout your maps and histories as we travel in a time machine of sorts to examine History & Geography through a biblical world view.  Till next month, have a blessed new year.
In Christ, Pastor Portier
Posted by Robert Portier at 11:21 AM No comments: